I almost ran over Tom Gray today. Well, I think it was Tom. It wasn’t intentional, of course, and he probably didn’t notice. We were both paying attention to our Main Street surroundings, as sensible Cambrians do. The crosswalk and Tom were where they were supposed to be. So was I, buckled in, hands appropriately spaced on the steering wheel. My eyes ran through the sequence – straight ahead, sweep side to side, check mirrors, react, and repeat. Tom, it seemed, was doing likewise, sans steering wheel. He made it across safely, and I continued on my way. So what happened? I’ll tell you what happened; it was those damn scarecrows, that’s what happened.

They are everywhere. On the corners, in the alleyways, and fronting just about every store in town. They pop out from behind the pines. They drop like party streamers from lamp posts. They stand guard at the entrance to the church. I stood on Cambria Drive for twenty-seven minutes, waiting for a Dancers By The Sea Flash Mob. Nope. Scarecrows.

Nuns and priests. Cats and Dogs. Goblins and ghouls. Pirates and Italian Chefs. I waved enthusiastically to a group of cyclists, thinking it might be Andy, Susan, and Charles. I assumed they were going slowly to accommodate a new hip. Wrong! Scarecrows.

After a spirited discussion on local water politics, I took off my glasses to give them a wipe. When I put them back on, I realized I had been arguing with a dummy, and not Cindy Steidel. Hoping nobody noticed, I patted a stuffed shoulder and thanked her for service to the community.

I decided to make the most of my mistakes and began shouting greetings to all the figures. “Hi, Elizabeth! Great pictures from the beach this morning!” “Thanks for the road closure matrix, Susan!” “Love the new sport coat, Mr. Lyons!” “How goes the potato crop, Leslie?” “Great piece on your time in country music, Kathe!” Sorry about almost running you over, Tom!”

And thus I made my way through town, thinking of something positive to say to each scarecrow. Words I might not have the opportunity to share in person with every real, living, and breathing character in Cambria’s ever-changing story.

Arriving at the far end of town, I popped into the Cutruzzola Tasting Room to say hello. I thought they might be busy, based on the crowd next to the building. DOH! Scarecrows with streamers. Thank goodness a real live Mari was there to talk me down. I did most of the talking, as I am wont to do. By the time I left, she was probably hoping for a mute scarecrow to stop by.

I made it to my original destination – the Cambria Library. I go there to write, and by write, I mean people-watch in between sentences. It seems like the natural place when trying to turn thoughts into words–into sentences–into paragraphs. I like this library. It is not so quiet that you can’t think. It is not so stuffy that you are afraid to sneeze. 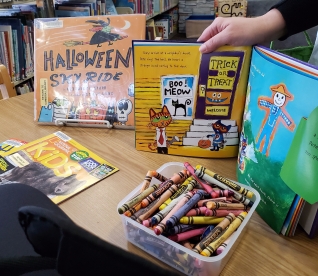 It is, instead, a welcoming place with friendly librarians, local volunteers who staff the bookstore, and kids with grandmas who come every week to exchange last week’s adventures for a whole new set of imagination boosters. Astronauts on week one, traded in for Lego Dinosaur adventures the next trip. Today’s choice features a Princess, a Snowman, and enough excitement to keep a young boy and a young-at-heart grandmother joined in exploration, building a bond that will strengthen with every turn of a page.

There should be a scarecrow for that.

Learn about the Cambria Scarecrows here.

1 thought on “Scarecrow, or Pedestrian?”