We adapt because we must. The unbelievable darkness brought by a raging pandemic has changed the way we live and work within our home. Artificial intimacies keep us connected to the rest of our world. Outside, communities also adjusted, some with grace and acceptance, others with fear and anger. It had become a familiar and  numbing routine.

Then the owl appeared.

We have spent the past few months engaging with the world through the looking glass of laptops, cellphones, and tablets. In the forty years we have been together, this is the longest time where it has been just us: no kids, no shows, no bands. No career grind, no months away from home, no fifteen hundred-mile separations. Just us, finding our spaces together.

Jan was at her piano, working through a complex arrangement of “Somewhere Over The Rainbow,” a classic song that features the wistful lyric “Where happy little bluebirds fly, beyond the rainbow…”

A riot of screaming scrub jays interrupted the music. These little bluebirds were not the happy variety. They bounded from branch to branch, aggressively vocalized their objection to an outsider visiting their neighborhood. An equally persistent group of smaller birds sang backup, fueling a constant screed. Their message was angry, unrelenting, and unmistakable. You are not welcome here. 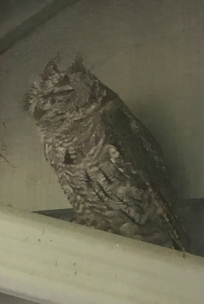 he outer chimney wall. The chosen spot sits under an eave, about three feet to the right of the dining room window. To see him, you need to tilt your head slightly to the left.

The visitor closed his eyes for minutes at a time, while the jays railed and the humans angled cellphones to capture a perfect picture of the unusual guest.

The owl opened his yellow eyes wide, turned towards us, and slowly blinked. “Hello,” we said, fully expecting that he would understand us and feel comfortable staying for a while.

The jays continued their assault but to no real effect. The owl – I suspect he is a bit of a badass – just looked calmly at them and, in a splendid display of serene composure, began blinking in time to the blue jay’s cries.

This unexpected visitor energized us. Jan grabbed her bird book – one of the very few thoughtful, unexpected gifts I had given her over the years. She thumbed through the pages, some of which have broken free from the binding, and found the owl section. We deduced it was a young Western Screech Owl.

The owl left for the evening, undoubtedly looking for a meal from the bounty all around us. We kept checking, wondering if he took off for good.

Wanting to share this close encounter, we tried unsuccessfully to connect with our grandchildren. We did the next best thing and sent them pictures and videos.

Two-year-old Ben is the youngest of our three grandkids. On the last, pre-pandemic visit, we spent a bit of time with a book that featured pictures of various animals. Ben would point at an illustration and make the sound the animal makes. Cows, ducks, horses were all covered. Then came the owl. Ben quickly began hooting softly, as expected. I decided to see if he could say the word “owl.” After a few tries, he did get it out. Owww- lll. Oww-ll. Ow—l. We were so excited by his accomplishment that the family spent the rest of the visit saying, “Ben, say owl!!!” And he did, every time. Two syllables, but still, the word is now in his forever vocabulary. He immediately knew what the pictures revealed.

River, the four-year-old philosopher, said, “There’s an owl at Nana’s house? She should keep it, but not in a cage. Birds should be free.” River can confound, confuse, and converse at a level way beyond her four short years. She is a bulldog when she wants to know something, and doesn’t settle for glib answers. You need to be nimble when you engage with her.

The owl returned the next day to the excited jibber-jabber of the neurotic jays. Jan was thrilled and immediately started talking and waving to him through the closed window. When the owl rotated its head, Jan did the same. When it preened, she preened. When it twisted about, in the way owls do, she followed along. It was funny, sweet, and a bit weird.

Jan suddenly left the room, returning a few minutes later with a gift for our visitor. This small, lovely object is a beautifully smooth stone, hand-painted with an exact representation of the owl perched on the other side of the glass. The totem had appeared a few weeks earlier, fallen out of a box during a friend’s move. It was safely sheltered in Jan’s creative space, ready to be returned after the dismal time of distancing and separation ended.

Jan carefully set the stone on the window frame, balanced between the upper and lower panes, a perfect line between woman, stone, and owl. She spoke conversationally, introducing the idol to the subject. Later, she retrieved Windex, paper towels, and a squeegee, cleaning the windows so everyone could see clearly.

These efforts made her very happy. I have a million thoughts as to why; some of them might be correct.

We picked up the iPad and succeeded in connecting with our oldest granddaughter, Chloe. After a few short moments, the picture came into focus, and Chloe saw the beautiful bird, blinking back at her. We watched her watching the owl.

In that distant moment, I saw all of her lifetimes at once. An infant’s innocence, a toddler’s curiosity, an adolescent’s puzzlement, and an awareness and intelligence that hints what is still to come. It shook me, I admit, and made me realize how much of her life- all their lives – we are missing as we wait out this plague.

The owl left us again for what we believe to be the last time. The painted one still sits on the windowsill, ready to restart the discussion should the living one decide to come back for a visit. Jan and I both look out the window towards the perch several times a day, hoping for another blessing. The jays come by every few hours, posturing like treetop bullies, spitting their dire warnings should anyone dare encroach on their turf. So far, the only interlopers are the squirrels that had been making a mess of the plants on the back deck, before the owl showed up. Somehow, the rock-faced replica does not seem to intimidate them as much as the living predator.

We know that this painful time of separation will end. We will hold our children and their children again. The painted owl will find its way back to the rightful owner, and we two will be stronger friends and partners for having survived this time together.

We were gifted one last surprise, wrapped in a spectacular rainbow of a fiery summer sunset. We watched from the front deck as the sky turned in the evening hour. As the sun slid down into the ocean, a magnificent bird glided gracefully above the tree line. We followed its flight path, thinking it was a hawk. It landed atop a Monterrey pine a distance away. It sat tall and still, then slowly rotated its head, coming into focus through the binoculars we keep next to the french doors.

The big, majestic owl looked at us for a short while, and then, he too was gone. 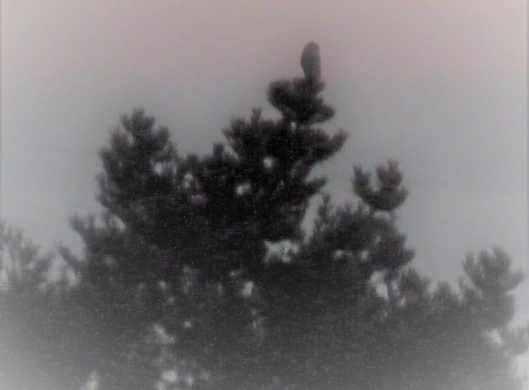